“I had a farm in Africa”

How good is your knowledge of literature? The quotation, “I had a farm in Africa …” is one of the most famous in English literature. Which novel does it come from? 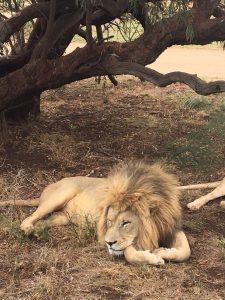 The quotation, “I had a farm in Africa …” comes from Out of Africa, an autobiographical novel by Danish author Karen von Blixen, under the pseudonym Isak Dinesen. The full quotation is as follows:

“I had a farm in Africa at the foot of the Ngong Hills. The Equator runs across these highlands, a hundred miles to the north, and the farm lay at an altitude of over six thousand feet. In the day-time, you felt that you had got high up; near to the sun, but the early mornings and evenings were limpid and restful, and the nights were cold. ”

The novel, published to critical acclaim in 1937, chronicles the time the author spent on an East African coffee plantation. In the novel, Blixen recounts her escape from her tumultuous life in Europe and her move to Africa to marry her lover’s brother, a once wealthy philanderer. While in Africa, Blixen meets a big game hunter, with whom she strikes up an unconventional friendship/relationship. The novel deals with hardship, determination, love, rejection, privilege, colonialism and racial relationships. Meryl Streep and Robert Redford starred in the Hollywood movie based on the book.

autobiographical: a book that is written about a person’s own experiences

pseudonym: a name used by an author to hide his or her own identity

highlands: a region that is higher than the surrounding area

altitude: the height (of land) above sea level

critical acclaim: to be liked or looked upon favourably by readers or viewers

chronicle: to tell the story of something

philanderer: a man who has sex with many women

big game hunter: a person who hunts game (elephant, lion, rhino, and so on)

determination: the ability to continue doing something, although it is difficult

rejection: the act of being rejected; not accepted

privilege: when a person has special benefits based on his or her race, age, religion, gender or social status