Is your office setup making you sick? Mine was, until I bought a Varidesk.

A Varidesk is  a height-adjustable desk that can take you from sitting to standing with one quick adjustment. 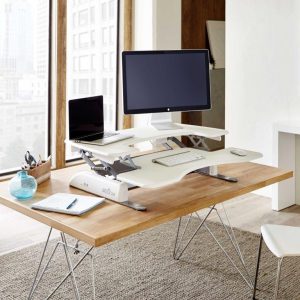 No longer at ease

As a freelance editor, I work exclusively from home, and have done so for a number of years.  However, until recently, I was breaking all the rules in terms of ergonomics. (Ergonomics is the science or art of making work spaces safer and more comfortable.)

For starters, my office chair offered no back and arm support. And I was ruled by aesthetics, not logic. My antique desk looked the part, but its dimensions were all wrong for me.

During busy periods, it was not uncommon for  me to work for hours on end without moving. Ironically, while I am active out of hours and over weekends, my working life has always been sedentary. It entailed sitting at my desk for between six to eight hours per day. I seldom moved, besides  inching towards the printer to add paper, or to take bathroom and coffee breaks. I even had lunch at my desk.  (A show of hands if any of this sounds familiar!)

I developed some lingering sports injuries from sitting for extended periods with my hips in a closed position.

I had been told about the importance of having the correct ergonomic setup and of the need to take frequent breaks to stretch, or simply to stand up.  Because I had seldom experienced any adverse effects, I kept beavering away in the same scrunched position I always had.

I also mistakenly believed that the amount of sport I did would compensate for my immobility during the day.

After a contracted period of feeling less-than-perky, with constant backache, neckache, headache, nausea and vomiting, I started looking at alternatives, which included finding an alternative desk-chair arrangement.

Then I recalled someone mentioning the Varidesk, and I did some research.

A wheeny bit of Varidesk history

Standing desks have been around since the 18th century, but they had snob appeal so only the very rich could afford them.

Architects and draftsmen have been using them, or variations thereof, forever!

They were originally made to a one-size-fits-all arrangement, so too bad if you were 5 foot 2.

Sitting-standing variations – or height-adjustable desks – are a fairly recent innovation. This is the concept on which the Varidesk  is based.

What the medics say

The term standing desk might seem a contradiction in terms, because desks are surely things we sit at. But it is the variable nature of the  Varidesk that makes it so user-friendly.

I have been using the Varidesk for about six months now. This is my perspective:

The video below shows just how easy it is to use the Varidesk.

What you can do

As I am self-employed, I was able to make the necessary changes to my work space. If you work for someone else in a larger or communal office environment, the chances are that you will have inherited your desk and computer from your predecessor. You are unlikely to have much say in what equipment you use. However, you owe it to yourself to  start lobbying management to look into the ergonomic health of its employees. Argue on the basis that you will be more productive. They might just listen.

For further information, go to www.varidesk.co.za